My opera is being performed!

This is a performance which will be a predecessor to a major performance next year, kind of a teaser.

A NEW OPERA DEBUTS IN SARASOTA!

We humans have been quarreling for thousands of years and it hasn’t stopped. Some of the most powerful reasons for this has been the presence of some characters in our midst who take over our minds.

There is GREED, causing a chain of events to occur which go amok causing misery and hopelessness to countless souls.

There is NO CONSCIENCE, steeped in utter selfishness and lack of compassion, caring less about anyone’s misfortune.

Then there is HATE, the bringer of doom.

We, the human race, have always given birth to the HATE MONSTER and it has sunk its fangs into our veins like the predatory vampire that it is. AND …. While these dark forces stalk, there are the forces of light to which we all turn for comfort.

There is REASON, teaching us to weigh what we do and choose a pathway of enlightenment.

There is HOPE, standing as a beacon to our souls in times of deep sorrow.

And there is the source of the greatest light, LOVE, giving our lives meaning and purpose.

There are always MANIPULATED MASSES who swallow drivel. But LOVE, the beloved queen of the World charms us into a mystic sea of happiness and conquers all things.

Only $5 at the door or online  in advance at www.srqboxoffice.com (+1.50 handling fee)

Libretto by Eberhard Gress and Music by Jay Starker

A very pleasant relief from scorching sunlight and oppressive heat has come upon us. After being bombarded by storm warnings and flood warnings and after mandatory evacuation orders of my home, I awoke this morning to refreshing breezes and temperatures which please the human soul. There was a wonderful feeling of empty space as the lack of traffic took effect on my consciousness. The brainwashed masses once again believed what they heard and gleefully prepared for the disaster. It made them feel very important to participate in a potential hurricane. Yet, on this day, we saw calm, refreshing weather clothing us. The schools are closed as are many businesses. A wondrous dream has come true. There is peace for a short while. Imagine if the masses were convinced to propagate a rational world of compassion. Could we stand it?

There was a fly in the pie and guests were arriving**

It couldn’t be reached without breaking the crust**

Of the fourteen wine glasses, one had lipstick on it’s rim**

A chair was a bit weak and might just collapse**

There were seven tea bags and fourteen were needed**

As everyone would be taking tea**

The hostess had one shoelace that was too long**

And if she stepped on it she would surely go down**

on the posh living room rug**

The teaspoons were merely rinsed without soap**

The piano was very audibly out of tune**

The handiman was scheduled to mow the lawn

and his lawnmower created a most raucous sound**

The front door had a trick lock which refused to open**

They would all have to trudge in through the back door

and it was starting to rain**

She might be short a plate or two or even three**

The trash people hadn’t been by for two weeks**

And the toilet nearly flushed every other time**

Six days she toiled and on this, the seventh day

she simply gave up**

But everything righted itself**

And much to her surprise things came together in a fashion** 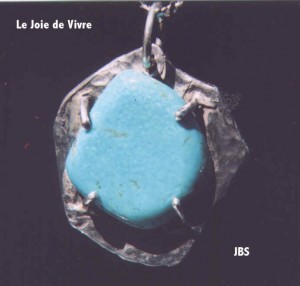 A new turquoise pendant I just made.

"By Golly" "Delight" A Dream A fart in time Ahoy A late August morning A little better Amor Vincit Omnia And Peace A Summer Day's Souvenir A thought from the past A World of Original Graphics Bungling Drunkards Cyber I Cyber Site Buddies Glory Be Hey******* Hey there^^ Hippy King speaks! How nice the daylight It's All New Again Kayzee and the Wolf Love Love a Mouse Lucky Us! Millenium Magic Music New Year's Greetings to All O Boy O Joy O Weh Plant People Know Quiet Peace Rosepetals Sarasota Lives saves nine So that might be it !! ten commandments This is "it" Together We Must Plod On Visual "Brainfood" weltschmerz What makes the molecules dance? Whoa Who me??? Wisdom Flows With Courage